Father Ray Kelly was in Dublin for The Late Late Show appearance, but earlier on the day he was interviewed by LMFM Radio who also played O Holy Night from his new album An Irish Christmas Blessing (still time to get it! see below for places to purchase).

Here is a link to the LMFM podcast, Fr Ray is right at the beginning of the Late Lunch show.
http://www.lmfm.ie/Podcasts/Podcasts/Show?showalias=late-lunch#7298

Later in the evening, Father Ray Kelly appeared in the Late Late Show with Ryan Tubridy. He sang beautifully with choir back up When a Child is Born also from the album. The show was streamed live on RTEOne Player app on mobile or on the web http://www.rte.ie/player/.

The recorded shows are usually available around a week past so look for the December 18 show around next week on this page:
http://www.rte.ie/tv/latelate/index.html

What a fabulous night on The Late Late Show with @TheJasonByrne and Louis Walsh tonight
— Father Ray Kelly (@fatherraykelly) December 18, 2015 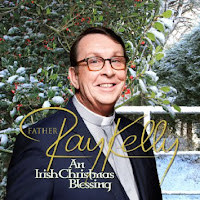